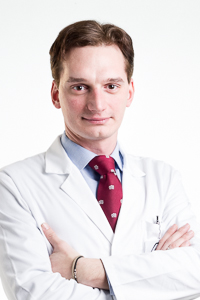 After having attended Scuola Normale Superiore of Pisa (Collegio Puteano), Dr. Giordano Fanton studied at the University of Pisa where he graduated in Medicine and Surgery in 2003. In 2004 he became fellow of the Board of physicians of Biella.
In 2007 he specialised in Ophthamology at the University of Torino where in 2012 achieved the qualification of PhD in Clinical Science and Human Oncology Faculty.
He is specialised in Microsurgery of the Anterior Segment of the eye. His main fields of interest are refractive surgery, corneal surgery, cataract, glaucoma and ocular traumatology. He gained a good experience in the Ophthalmologic diagnostics, especially with A-B Scan Ultrasound Technologies, High Frequency Ultrabiomicroscopy (Ubm) and Visual Research. He got international qualifications of relevance. In 2010 he became member of European Board of Ophthamology (FEBO)
In 2013, after having studied at the European School for Advanced Studies in Ophthalomology (ESASO) at the University of Italian Switzerland, he earned the DiSSO (Diploma of Specialist Superior in Ophthalmology).
Since December 2012 he has become member of FMH (Foederatio Medicorum Helveticorum) and has entered the Boards of Medicine of Canton Ticino (OMTC).

Graduated from the faculty of Medicine and Surgery at the University of Torino in 1976.
In 1981 he specialised in Anesthesiology and Reanimation..

During his career, Dr. Graziano Fanton worked for important healthcare realities of Biella territory. Founding partner of Bioethics Association of Biella and co-founder of Home Palliative Care Service in the Biella territory, he contributed to several researches in the pharmaceutical field for the treatment of traumatic cerebral coma and infections in intensive care unit.
He also organised several conferences and was first aid staff training professor..

Why Eye Exams are important!

For both adults and children alike, eye exams are vital to check for early signs of eye disease or health conditions in order to prevent future damage and preserve optimal eyesight. Click the button below to request an appointment. If you have any questions or need further additional information, please contact us filling the contact form. We will gladly assist you.
Book an Appointment
Scroll to top